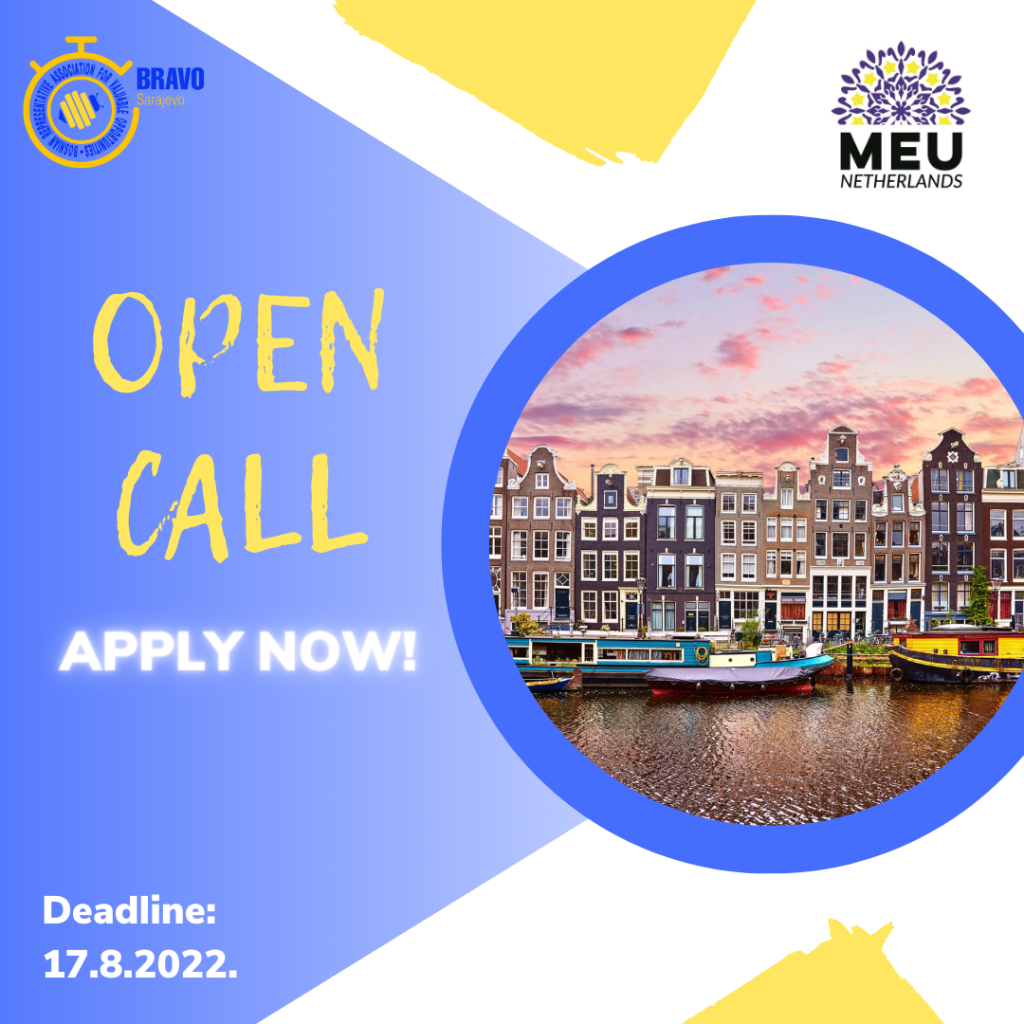 The number of participants: 4

The applications for MEUNL 2022 (26 – 30th of October 2022) are officially open! You can apply to participate in the simulation as a Member of the European Parliament (MEP), a Minister for the Council, as a journalist, or as a lobbyist. This guide will help you with your application, so please read the role descriptions below to find out which one is the best fit for you!

Due to this project being funded by Erasmus+, the participation fee was waived for all our participants. Lunch, coffee breaks, socials, and goodie bags will be covered.

Moreover, subject to the following partner countries for this project: Albania, Armenia, Austria, Bosnia Herzegovina, Croatia, Czech Republic, France, Georgia, Greece, Italy, Lithuania, Netherlands, Portugal, Romania, Slovenia, Spain, Sweden, Turkey, and Ukraine. Participants coming from these countries will be eligible for extra coverage related to accommodation and travel which will be communicated in the acceptance email.

ACCOMMODATION, FOOD AND TRAVEL COSTS for BRAVO participants will be fully covered by organizers.

The applications will close on August 15th. We will contact you after we close the applications with the results, specifying your general role. We will then also ask you to pay the accommodation fee so we can book the accommodation (if applicable) and cover our expenses. To secure your spot at the conference, please make any requested payments within 10 working days after receiving your selection result and send us a copy of the proof of transfer. Your exact role (i.e. which party/ country/ organization) will be specified at a later stage.

At MEUNL 2022 we will discuss two proposals discussed by the European Union:

A study guide for the topics will be sent later on, to help you prepare the topics adequately.

Before the conference begins, you will receive several infomails from our Participants Coordinator containing the Study Guides and Conference Guides you need to adequately prepare for MEUNL 2022. Please also follow our Facebook and Instagram page to track all the news related to Model European Union the Netherlands!

Additionally, you will be expected to participate in a preparatory workshop which will take place on the 16th of October. The exact times of this workshop will be announced at a later time. If you are not able to attend this workshop, please let us know as soon as possible.

Member of the European Parliament (MEP)

As a MEP you are elected directly by the citizens of your Member State and you will represent them in the Parliament. However, as a national politician you are also part of a European faction: the European parliament groups. Factions on the European level are more heterogeneous than the political parties of Member States, which makes it harder to find common grounds on your group priorities. Even though most MEPs in your political group might set out a common position for your group, it’s not out of line to dissent if your national party disagrees.

You have to cooperate with your colleagues to reach common ground and then push for a consensus within the European Parliament and later with the Council of the EU. To reach an understanding with the Council, a few MEPs should be elected to join the Trialogue Committee, which also consists of Council Members and Commissioners.

Minister in the Council

The Council of the European Union is the other legislative body of the EU – previously more independent, it now shares most of the legislative powers with the European Parliament. The Council consists of several configurations of twenty-seven ministers, each from one Member State, thus being an intergovernmental institution of the EU. The role of the Ministers in the Council is closely connected to the positions held by Member States that send their ministers to the Council to make European legislation.

Therefore, when assigned the role of a Minister, one is expected to acquaint oneself with the country’s politics and positions on issues at hand. Since Ministers are politically responsible to their governments, this role will demand from prospective participants an active involvement and sometimes vigorous advocating of their country’s interests. Ministers may often clash over their opposite national stances, creating gaps between the Member States that need to be filled with strong arguments, persuasion and compromises.

Journalists at MEU NL are responsible for gathering all the latest news, insights and positions out there related to the legislative proceedings in Parliament and Council. As a journalist, you will interview MEPs, Commissioners and Ministers to find out their particular positions on hot-button issues and publish them. In what way you publish the scandals and new developments is up to you and your fellow journalists: together with the Journalists’ Coordinator you will decide to write a newspaper, host a video-blog, host radio session, or take photos and join press events to make sure that participants get all the latest information available.

As a journalist your goal should be to find the biggest differences in position between factions or disputes between the Parliament and the Council, just to name some examples. As your aim is to inform both participants and the general public as well on the proceedings of MEUNL 2022, it’s your choice on how to do so!

At MEUNL, lobbyists also play a vital role representing their interests groups. Since they neither have formal power nor a well-defined role, Lobbyist participants will have to be creative, resourceful, charming and energetic. Smiling, and engaging with every other participant is key!

Having the most flexible role in the simulation, they have a disproportionate amount of freedom and responsibility. A challenge, to be sure, but the fruit of your labour is all the more rewarding!