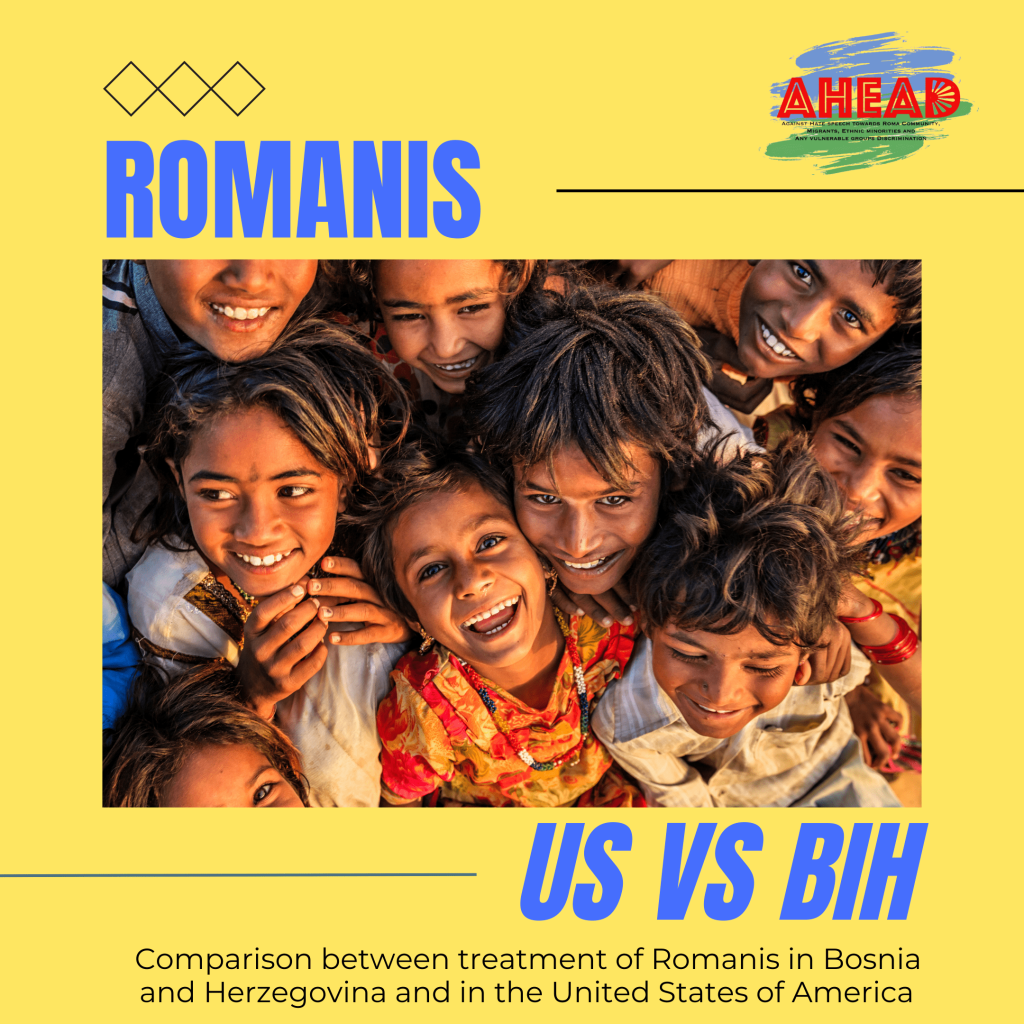 In addition to the three constitutive nations, 17 national minorities live in Bosnia and Herzegovina, among which the Roma are the most numerous and most vulnerable population. No minority in BiH is in such a problematic and difficult social position, living on the margins of society, often without basic human rights. Today, it is difficult to determine the exact number of Roma living in BiH, however the most frequently mentioned number of Roma in BiH is around 65,000-70,000. The constitution of Bosnia and Herzegovina itself, which was created as part of the Dayton Peace Agreement, treats 17 national minorities as second-class citizens, calling them “Others”. It is estimated that around 400,000 citizens, or 12% of the population, cannot run for the position of president or member of parliament because of their religion, ethnicity or place of residence.

After we can conclude that in the most important document of the state of Bosnia and Herzegovina, there is open discrimination against the Roma population, through the impossibility of full participation in the political and social processes of life. We can then imagine at what level they are discriminated against in society, by state institutions and especially by their fellow citizens.

Throughout their daily life, Roma encounter enormous life difficulties, prejudice, discrimination, exclusion, dehumanization and are often victims of violence and hate crimes. Bh. society is still largely under the influence of negative stereotypes and prejudices about
the Roma population, which includes various forms of hate speech. Roma are often “idlers, criminals, pickpockets, less intelligent, don’t want to get an education,”  etc. In society, the derogatory name “gypsy” still persists, and it is often used even in negative connotations for the purpose of scaring children when raising them, where we hear the traditional phrases “the gypsies will steal you if you don’t listen”, “we will sell you to the gypsies”, etc. The consequences are that children are familiar with given stereotypes from the earliest years and grow up seeing Roma as people different from them, without empathy and equality.

Roma are rejected by their peers, with very little social interaction, with the feeling that other children “look at them differently”. In the Balkans, in general, we can say that there is a type of internet subculture where there is “humorous” content in which Roma are made fun of in various forms, we can also see examples through telling jokes. In many cases, Roma have been victims of violence or crimes committed out of hatred, where they have insufficient trust and insufficient protection from the police and judiciary. Discrimination is most noticeable in the areas of education, employment, housing, and health and social protection. Despite the

opinion and stereotypes that Roma are not particularly interested in education, research shows that the majority of the Roma population is aware of the low level of education and recognizes it as one of the main conditions of marginalization and poverty. The

consequences of prejudices and stereotypes are also noticeable in employment, which creates mistrust of employers and the impossibility of getting a chance for a stable livelihood. Also, there were difficulties when striving towards the realization of projects for the construction of housing facilities for Roma, due to the resistance and revolt of the local population, for whom Roma are often “unwelcome neighbors”. It is inevitable to say that the Roma in Bosnia and Herzegovina are a socially marginalized group, which suffers discrimination in all spheres of life. From institutional discrimination to social, i.e.interpersonal, discrimination.

Now on the other hand, a population of about one million, Romani Americans have been part of the diverse American ethnic mosaic for centuries. Historically, Roma people arrived mainly from Europe, escaping oppression and hoping for a better life. But anti-Roma sentiments followed them across the Atlantic. In the United States, there are also enduring stereotypes about a “culture of criminality” within the Romani community. Such prejudice not only leads to discrimination against Romani Americans in their everyday life, but has also informed discriminatory law enforcement practices. A November 2020 study conducted by the Francois-Xavier Bagnoud Center for Health and Human Rights at Harvard University and Voice of Roma, a nonprofit based in California, has demonstrated the prevalence of institutional discrimination the Roma are facing in the US.

Two-thirds of the 363 Romani Americans interviewed perceived the portrayal of Romani people in media, including film and television, as profoundly derogatory and dehumanizing. Typically, Roma people are depicted as criminals, wanderers, or witches. Such stereotyping serves to justify anti-Romani discrimination and harassment and is rarely challenged by media commentators. Racial profiling by police is very common. Law enforcement across the country has embraced stereotypes about Roma criminality. In recent years, police departments have set up task forces specialized in “G*psy crimes”, appointed “G*psy crime” detectives, and organized police training courses on “G*psy criminality”.

The National Association of Bunco Investigators (NABI), an organization of law enforcement professionals focusing on “non-traditional organized crime”, has even created a database of individuals arrested or suspected of criminal activity, which clearly marked those who were Roma. We understood from this text that there is no difference in discrimination and above all the most important thing is that in all spheres of public opinion and social life, through education and training, the fundamental values of acceptance of diversity, tolerance and empathy are promoted in relation to those who they are not of the same affiliation, status or origin.